Book Review: OCD, The Dude, and Me by Lauren Roedy Vaughn

Title: OCD, The Dude, and Me (GoodReads) 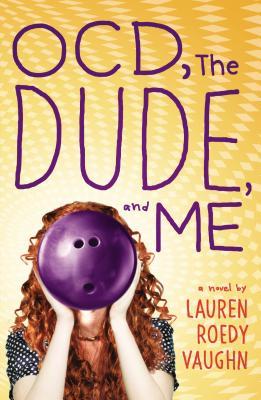 Goodreads Summary:
With frizzy orange hair, a plus-sized body, sarcastic demeanor, and “unique learning profile,” Danielle Levine doesn’t fit in even at her alternative high school. While navigating her doomed social life, she writes scathing, self-aware, and sometimes downright raunchy essays for English class. As a result of her unfiltered writing style, she is forced to see the school psychologist and enroll in a “social skills” class. But when she meets Daniel, another social misfit who is obsessed with the cult classic film The Big Lebowski, Danielle’s resolve to keep everyone at arm’s length starts to crumble.

The Good:
This book is told through a combination of letters, emails, and essays, which makes this a fun and easy book to read. Danielle has such a great voice. She’s self-aware for the most part. She’s sarcastic and amusing, and I found her really easy to relate to most of the time. She’s flawed but still likeable, which is my favorite kind of character. She says the wrong things. She does the wrong things. But at the end of the day, I still wanted her to be happy and get what she wanted, even if what she wanted wasn’t always what was best for her. She was a very believable character for the most part.

The rest of the characters were also great. She’s relatively close to her parents – or at least as close as a teenager can get for the most part. She’s closest to her Aunt Joyce, who’s very open and honest with Danielle but in a loving way. I’d love to have an aunt like her. Daniel is a great friend, and he made me laugh while reading this book. We get to learn a bit more about her teacher throughout the book, which I liked. Her teacher is aware of more than she lets on, and she cares about Danielle while still doing her best to push her to do more than she thinks she is capable of. Ms. Harrison doesn’t always succeed, but she does her best.

I liked that there was a good mixture of adult and peer relationships in this book. I’ve read a lot of young adult books where the adults mysteriously vanish for the most part, and that wasn’t true here. All the adults in Danielle’s life really cared about her, and that was quite obvious.

The Not So Good
The summary states that this is a book that features someone with “a plus-size body.” Danielle does not have a plus-size body. She goes on and on about how fat she is, and then she mentions that she’s a size 12. That’s annoying enough anyway, as I would never consider a size 12 fat. Hell, my goal pant size is like a 16, and I don’t really think I’ll ever get there. But that’s not the point. The point is that we learn a few pages later that Danielle is not even a size 12. She is a size 8.

I’m sorry, but on what planet is a size 8 “plus-size”? The more I think about it, the more it upsets me. I could deal with Danielle thinking that she’s fat even though she’s not. Tons of girls think they’re fat when they’re not. But the fact that the book description says she’s plus-size means that the adults who helped get this book into print thought of her as that way, too, and that is just wrong. It sends the wrong message to girls who already receive enough mixed messages about their health and weight (which are not the same thing).

Anyway, that fact alone knocked the book down a lot in my opinion. I’m also a bit unclear about the fact that she’s supposed to be in an alternative high school and yet I saw nothing alternative about it other than the fact that she could eat lunch outside, which is pretty standard in most YA books. I expected more of her classmates to have problems, as well, or to have the school be set up in a weird way, but it wasn’t. It seemed like a normal, albeit somewhat small, high school.

Her relationship with Justine was also weird. I’ve never gone on a class trip to England, but I can’t imagine that you could disappear and go to the tour guide’s house for lunch and no one would think that was strange. And there’s a scene involving her near the end that I thought was kind of dramatic. It didn’t ruin the book or anything, but it was a bit strange.

This book also handled more mature subject matter than I was expecting. That wasn’t a bad thing, necessarily, as I enjoyed reading it. I just thought I’d mention it in case someone was thinking of giving this book to someone in middle school. There’s a fair amount of swearing, drug use, and talk of sexual activities. I personally don’t care if middle schoolers read that, but I’m sure others might.

Also, I’m sure the second half (maybe last third) would have been more fun if I had ever seen The Big Lebowski. That said, you definitely don’t need to have seen the movie to enjoy this book. An understanding of that movie probably would have just made it better.

Overall: The writing’s good. The characters are great. This is an easy, fun read that deals with some difficult material in a good way. This book would have gotten a much higher rating from me had they not described the heroine as “plus-sized.”